Like most women, I have an absolute love of accessories and adore using them to compliment my different looks, but shoes and bags in particular have always held a special place in my heart! These do not necessarily have to be designer branded, practical or comfortable, for me to like them, as long as they compliment my look. The expression “beauty is pain” has come to mind on so many occasions in my lifetime but it is a sacrifice I have been happy to make in the name of looking good, and I think that is something that the majority of women can relate to.

I confess that until recently, I had never owned a designer handbag, with them mostly being out of my price range, I just haven’t been able to justify indulging myself, but i was lucky enough to receive one as a christmas gift by the well known designer Lulu Guinness, and now, I must admit, I am now totally smitten with her quirky and cute designs and I wanted to find out more about her and her brand.

Lucinda “Lulu” Guinness is a British fashion designer specialising in accessories such as purses and handbags, who founded her own company in 1989. Starting off in the basement of her house, Lulu had the idea of creating an elegant and forward thinking briefcase for women. The exterior was black leather but the inside was lined with purple or red suede which was considered to be quite outrageous at the time. Her intention has always been to slightly push the boundaries.

Lulu is very rarely seen without wearing her trademark red lipstick which famously features in so many of her designs, making her the absolute personification of her brand. She now has shops all over the world in New York, Tokyo and London to name a few countries, and a number of high end retailers such as Harrods, Selfridges and Fortnum and Mason stock her masterpieces.

Her website's current highest priced bag is the Black Fontaine Clutch Bag, retailing at £395 ,and the lowest is the Raspberry Lips Hardsided Vanity Case retailing at £95. The brand as a whole is now worth approximately ten million pounds!

Celebrities such as Kate Moss, Emma Watson, Paloma Faith, Katy Perry, Christina Aquillera, Alexa Chung, Dita Von Teese and Helena Bonham Carter are all big fans of Lulu taking her designs to the red carpet on a number of occasions. In the queens’ birthday honours awards in 2006, Lulu was appointed an OBE for her service to the fashion industry and in 2009, received The Independent Handbag Designer awards Iconoclast award for lifetime achievement in handbag design. Her vintage Florist Basket bag is even a part of the permanent fashion collection at the Victoria and Albert Museum, which Lulu says is one of her proudest moments. 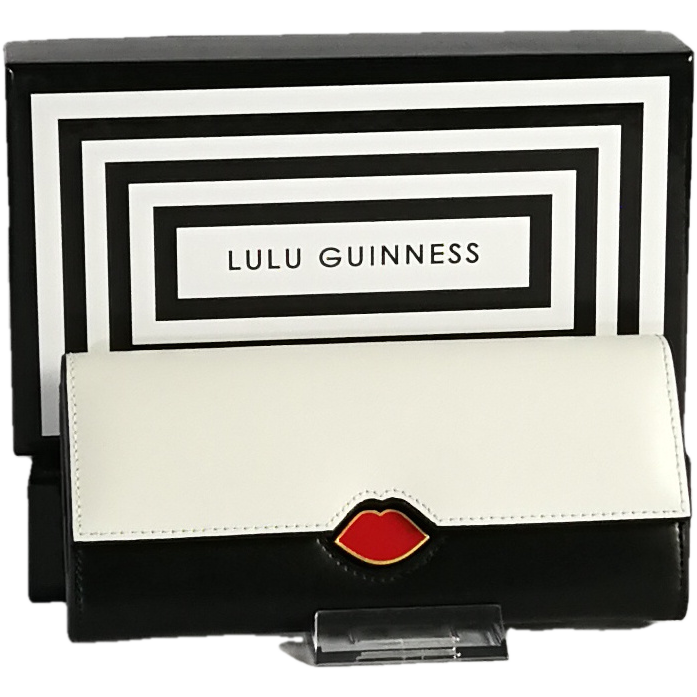 The Lulu Guinness Cora Lipstick Purse shows how outrageous her designs can be with the trademark black, white and red."

There is no denying that her motto “dare to be different” has greatly contributed to her success with her unique designs and distinctive personal style reflected in her handbags and keeping her at the top of the fashion industry for the past 32 years.

The bag I received for christmas was the “mini Izzy” in polished burgundy leather and for such a small bag, I can’t explain the huge sense of confidence I feel when I take it out with me. It is super feminine which I love and I just know this isn’t going to be the only Lulu Guinness bag I own in this lifetime. Better start saving!